Yesterday was SO much fun. I talked John into letting me do a semi-regular post type thing with how I'm progressing through the game. So after beating Malistaire last night I really wanted to jump straight into Celestia. Oh, I didn't tell you? Yeah, Kymma Shadowthistle and I whooped up on the big lug last night with Maria Moonblossom's help (For those of you who don't know, Kymma is Kestrel's little sister. She's a sorceress much like my older cousin. No idea what people see in the balance school.).

So I wanted to jump straight into the depths, but John wouldn't let me. No, he doesn't control me. But he does have some sound advice sometimes.  He told me I should run the hollodeck program to see what it was like retrieving the Celestia Key before I went prancing off so that I could appreciate all of the hard work my predecessors took to get there. Ok, fine. History lesson time!  He wouldn't let me do THAT until I had proven myself in the first cheating tower, though. So we went on a whirlwind adventure through Briskbreeze, the Warehouse, and then Kensington Park to call it a triathlon. Looky at my badges! 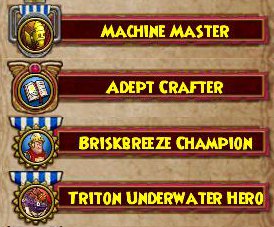 I also did Crab Alley this afternoon (because it was uncovered after I left Wizard City for my studies abroad) and achieved Adept Crafter. John said I would want that before Celestia but he wouldn't tell me why. Any input would be great!
In other news, John has decided to save the time of an introduction every time I post, I should just provide you with a current headshot complete with level. So here's my current one. These will be attached to all of my posts in the future until he decides he wants to try something else (and I think John is going to start doing it, too. When all six of us are finally posting it will be much easier).