Pick on Somebody Your Own Size (Or Better Yet, Not at All)!

Hey! I'm back posting this one, and it's not going to be pleasant. Oh, right, the picture thing I'm having Noah do.

Noah just gave me a ring through our telepathy link, horribly annoyed with all of the wizards picking on him. Were they picking on him because he's not a Legendary? Nope. How about because he used a treasure card in a fight? Nope. Too high-level to be in his zone (he's working on Grizzleheim at the moment)? Nope again.
It's because he wears blue fairy wings. I asked him how he handled the situation, making sure he didn't accidentally swear at one of them (he doesn't enjoy being told he is wrong. Must run in the family...). He told me that he kept a tight lip on anything unsavory, instead opting to explain that a) they were a gift, and b) that he is secure enough in who he is not to listen to the gender stereotyping so common in our fair Spiral.  Guess what. I've been flitting around on wings, too. The orange ones fit my current style very well, actually, and they're really nice.  Noah made some very valid points. 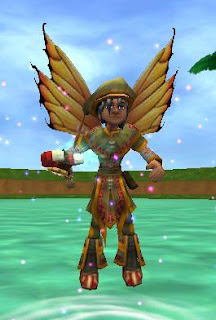 Most likely the culprit is either a) jealous of your fancy new wings, or b) insecure about themselves. Maybe I'm not seeing it so much because I'm wearing the orange wings, which happen to be the "least girly colors".  But this seemed really low. If we want to get really gender stereotypical we would continue to say that only girls can ride a White Mare or the Astral Ponies on the grounds that they're "cutesy" (save for the Moonlight Pony), and that boys should all have Bone Dragons and Black Stallions because they look "intimidating". That's just silly!
What if Noah was actually a girl playing a male character? Would she deserve to be called something unsavory because she likes the wings and happens to be on a guy?  What about a guy playing a girl character? Would using fairy wings be allowed then?  It's not even questioned when we see that, but many male players make female characters and vice versa.
In less serious news, my header will soon be updated to include Noah. He'll be posting quite a bit (regardless of him threatening to mess up the shared bank and knocking the balance school). I just have to figure out how to illustrate it.

Let me know what you all think of this situation, or if he's just being overly dramatic.