It's the Final Foodcart!

Long story short, Kensington park holds some AMAZING furniture items ripe for the picking, if you dare enter through its sinister sigils.  It really isn't a huge problem now that the golems have slowed down, and with a certain Kevin Battleblood's tactics, the once 3 hour behemoth has been knocked back to roughly 1 hour!  Way to go Kevin!!!  I was farming with Kevin Battleblood, Heather Emeraldflame, and Fallon Deathslinger (who unfortunately never made it in due to technical difficulty and people porting at the wrong time...) and during our first go I received the Carved Pew.

Ah the Carved Pew, many seek it's wonderfulness, few walk away with it.  I consider myself lucky to have received such a rare and amazing furniture drop on my first run of the night.  It looks EXACTLY like the seating in Wolfminster Abbey :D  And here's a picture of it in the inventory screen:

After the amazing Carved Pew the drops were all clothing, and snacks.  Kensington Park really is an astounding place to receive pet snacks!  In our second run Fallon said she had just entered a dungeon of her own, so she would no be joining us.  Sean Emeraldflame entered instead, and off we went again.  Run number 2 brought me the final foodcart :D  I had longed for a Yellow Foodcart to complete the set in my mansion for quite some time, and finally I had it!  Here's a picture of that, too:

And then, on the 2nd Stoker, I got the drop of Lord Ben, my Seraph.  I didn't think that Lord Ben was a very appropriate nickname for a Seraph so I renamed her Lady Cleo.  I think Cleo is happy withe me.  And here come the screen shots, be ready now, there are a LOT! 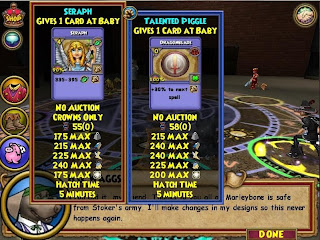 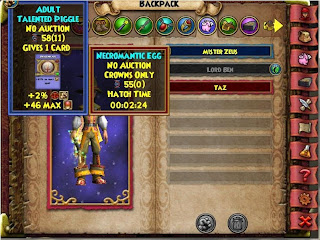 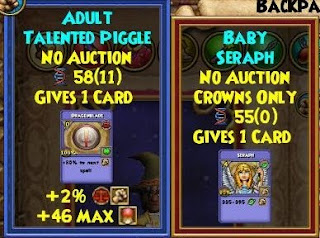 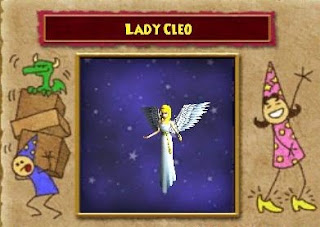 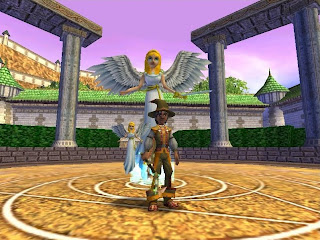 And last but not least, Lady Cleo at home with her mommy :D  I wish all of you the best of luck in your farming endeavors, and now the Seraph will officially be removed from my list!  I'm still game to accompany with Kensington runs for the purpose of pet snacks and a Mechanical Spider!  And a couple more rare furniture drops.  I believe I need to hop to training this beautiful little pet, the faster that goes the faster we can have Seraph information for the Petnome Project!  Yes, the contest is over.  If you were procrastinating it is too late, but please keep sending in pet information!

See ya in the spiral!