Give That Girl some Megas

Heather Raven, I commend thee.  The contest from the previous post is now closed. Heather wins the Megas!


Magically Posted by John Lifeglen at 11:01 AM No comments:

[Admiral Maxis]
Warning, warning, danger, danger. You are about to enter a land of random thoughts all strung together at once trying to get it all out in text before I forget the details. Also, the post is VERY long. It's not all text, though. The bottom half (...3/4) houses lots of pictures from my adventures in Star Trek!

I am now a Vice Admiral (level 50) in Star Trek Online. STO's level cap happens to be 50. I have also joined Tipa's fleet (the Federation News Service). We did some raiding tonight. It was fun. Tipa's guides to the normal level STF (Special Task Force) raid-y-esque things are SUPER useful. We thwarted Borg and helped save Defera and realized that we need to go save Defera more. A *lot* more. There's a great new Frequency Remodulator that we all really want because it shaves a second off of...ya know what, STO is F2P now. Go see for yourself why shaving a second off is wonderful (and just what the heck I'm talking about).


All of my Bridge Officers (BOs) are dressed for the current Feature Episode Series called "The 2800". For Trekkies in the room, yes, the Dominion are back. Funky stuff happened with the Wormhole. There's lots of fighting. Bajor is the current outpost. Good stuff. My toon (and his entire BO compliment of 12) is dressed up for the occasion in Deep Space 9-esque attire. It's awesome.

I have written a parody for Headaches from the Holidays. We're joking about a "Top 40 Redux" Parody album of sorts *just* for our PvP matches. It's called "Click Quick" and matches the tune of "Tik Tok". The 2nd parody for the album is in production and will be known as "Long Match" set to "Bad Romance".
Also with the Headaches we played another ranked match. My Warlord rank got us pitted against a 4 Warlord team. We hung in for 4 hours (v.v) but in the end got nuked. Good news: I'm just a Commander now. No more Warlord. Maybe that will mean smoother sailing for us.

Picture Dump! (First the Parody, then the STO Picture dump)

Fun fact. Andoria is the closest habitable planet to Earth in the Star Trek Universe. Vulcan is incredibly close to us, too. They're just on the other side of Andoria.

More pictures! My ship interior. It's HUGEEE! And a picture of the Admiral's Jacket thing full-size. 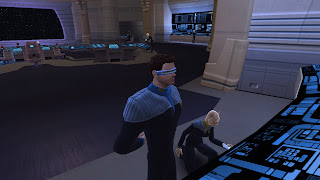 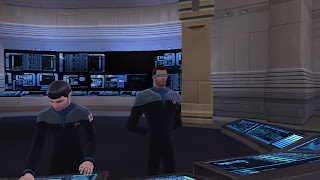 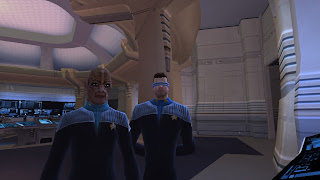 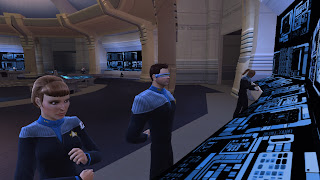 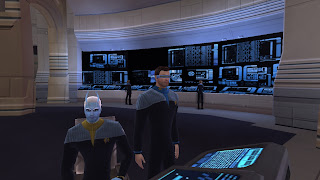 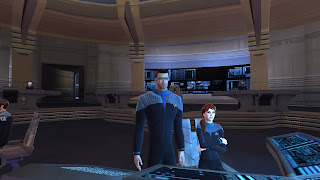 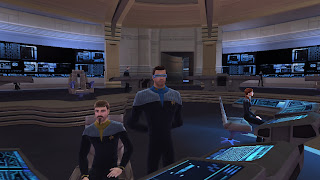 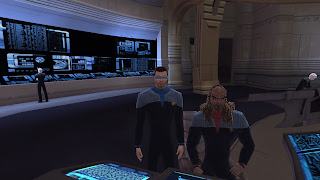 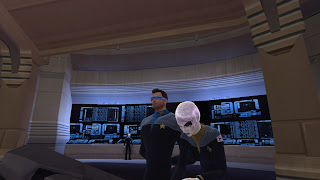 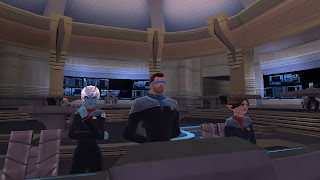 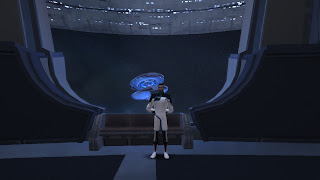 And, if you read allllllll the way through all of that, there's a contest here. You have until Friday, February 24th 2012 at Midnight CST to come up with the signifigance of the following picture. It's a shot of my ship. You need to tell me who and what the name is in reference to, what "NX" stands for in a Starfleet Ship's name, and what the 4 numbers following the "9" (because 9 must be on all of the ships, I couldn't adjust it) mean. Also, explain what the letter following the number represents.  All parts must be correct in order to receive the prize. If you make a mistake with your first entry, feel free to comment again. No comments will be published until a winner has been declared or the time limit is up.

Hints: The letter references a place. The numbers represent something associated with that place. The ship's name is the biggest clue, and therefore I can't tell you anything about it!

The winner (if there is one) will receive a Mega Snack Pack, courtesy of me. (If you are here due to my character's "Comments" section and you win, I'll come up with a nifty gift for you in STO. Possibly a nice BO candidate.  If I know you in both, it's totally your choice where you get the goodies.) If nobody gets it, well, my pets don't mind megas one little bit! Comment on this post with the answer rather than sending in e-mails. Time-stamping entries is easiest that way.

Your Friend Always,
John Lifeglen
Magically Posted by John Lifeglen at 2:36 AM 1 comment: