So...I said the AWESOME picture Autumn Duskhunter made for me would grace my header...but Blogger is not cooperating right now so I'll post it here first and I'll work on it when I have more time and less work/studying to do.  Oh Blogger, how you always manage to make things difficult. 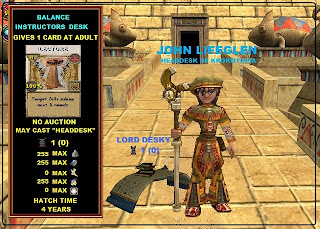 Thank you Autumn for this amazing edit.  If I could replace Judgement with a desk, I totally would :D

Heya Gang!  Just a brief post today to get back into the swing of my little guessing game!  I've had this one edited for a while and just kept forgetting to put it up.  Here it is. :) 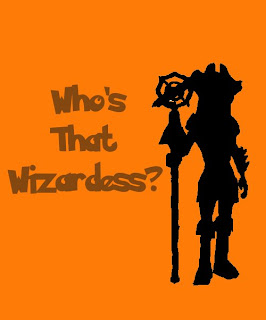 As per always, comment with who you think it is.  I'll edit the post sometime in the nearish future with answers.  Yes, I am receiving your comments but I'm not publishing until everyone has a chance. 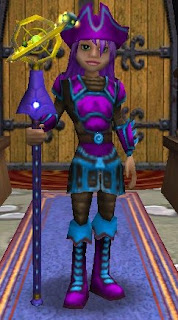 Finals week is fast approaching and this college student needs to hit the books.  Less spiral time in my near future as my math classes are taking over my life.  I'll still be sneaking online once in a while for a bit of 3v3 action ala Matthew Deathcaster and Maria Moonblossom.  We have to get Maria's rank up so she can get Conviction.  I'm sitting pretty on Knight (still >_<) and working towards advancement (almost had it last night but we met a blade stacking team and we went 2nd...and none of us were carrying Melts at the time.  If only sideboards could be bigger some days...).  Matt has achieved Conviction and is sitting on the line between Veteran and Knight (though on which side of that line escapes me at the time being).  I can't wait to rejoin you all in the spiral more permanently this summer.
In other news, the pinnacle of the Wizard101 Community is bidding us a brief adieu.  The Friendly Necromancer aka Thomas Lionblood is taking some time away from blogging.  Friendly, know that you will be greatly missed by all of us.  Enjoy your time away and Godspeed in all of your future endeavors.  Looking back, Through the Eyes of a Sorcerer wouldn't have been created without the inspiration from you and it has been amazing getting to know you and your family better.
And now I'm off to study for that Calculus exam tomorrow -.-
Your [Swamped] Friend Always,
John Lifeglen
PS. The Spiral Hunger Games STILL need 11 more people.  I would LOVE to kick this off soon, so take a look at the picture on the Hunger Games Tourney tab and tell me where you want to play!  Comment on this post or join the group on Diary of a Wizard ConnectX.
Magically Posted by John Lifeglen at 8:37 PM No comments:

Before the fanfic begins (as that's how I address ALL of the issues I find in game) I want to take a moment to commend Autumn Duskhunter and Kestrel Shadowthistle (Comments in THIS post and the body of THIS post.) for inspiring me to write a portion of this in verse.

Dating in Wizard101 is causing mayhem in game.  It's getting a bit better since filtered chat has had the use of capital letters removed.  And here we go.

Upon waking the following morning and realizing my friend was gone already, I made my way for the door.  As I was about to ascend the spiral stairs leading to the surface, I heard the distinct sound of a knock on my World Gate.  I headed out into the bright desert surface above and answered my door.  A pair of wizards were holding hands, giggling and smiling at me and asked if I had a double room.  Repulsed, I responded that this is a game, not reality.  When they continued to ignore me and giggle I opened up into rhyme.


This spiral is a wonderful place,
To come and play at your own pace.
Begin, though, to date,
And soon you will hate,
Logging in without seeing their face.
Dating online can be bad,
It doesn't make you look rad.
Even though it's not fair,
You'll end pulling your hair.
Because Reports will likely be had.
Get out of my house you fools,
This hotel surely has rules.
The boys cannot stay,
With a girl anyway,
Now get back to Ravenwood School.
There's a reason you live in the dorms,
Boys and girls in separate form.
Now get on to class,
Or start cutting my grass,
Before the oncoming storm.
Something I said must've sunk in on some level, at least, because they dropped hands and turned on the spot, teleporting back to Wizard City as I had directed them.
I ran back downstairs, grabbed my shiny Lifeforce Blade, and made my way to the spiral door for myself; stopping only briefly to untie Pierre the lobster and take him with me.
--------------------
So as the limericks stated, dating in game is bad.  A lot of players report others [falsely] for dating.  The "I need a boy" or "I need a girl" comments in the commons are getting very out of hand.  Kevin Battleblood tweeted the following phrase that he saw in the commons on day: "Are? You? Cheating? On? Me????".  This has got to stop.
And there you have it.  Another in-game advice article courtesy ala John.  I'll be moving a copy of this to the fanfic tab immediately so that you may read it in full!
In other news, Eggbert is back in the Spiral and he brought Pet Eggs with him!  These first generation beauties all seem to be getting Snowborn rather early.  For those of you who don't know, Snowborn is a talent that places one Blizzard card into your deck *Thank you to Sorceress Miklai for the catch!*

So...that little countdown on the Wizard101 Launcher led to this morning...and the release of a Pet Rock.  How many of you had pet rocks as little kids?  Yeah, they were a great way for parents to make you think they were giving you some responsibility by super-gluing googly eyes onto them.  Pet rocks were worth hours of fun.  They aren't, however, the first to provide a low maintenance pet to their players.  RuneScape (produced by Jagex and seen in various past posts of mine HERE and HERE) also provides pet rocks upon the completion of The Fremmenik Trials quest.  Yeah, you can own a brand spanking new rock (complete with googly eyes) in Wizard101 now for one low payment of 2900 Crowns.  I'm with Autumn in that I'm buying a rock because I believe they will play an integral role in SOMETHING.  And hey, why not?  It's a limited edition item and for those of you who don't know me that well I am ALL about the collections.

In other news, Wizard101 has distributed codes to all featured fansites and the contests are already rolling!  Check out this link for links to all of the featured sites!  I'm entering quite a few of them myself, but I'll leave the contests that have mounts that I already have alone to help everyone else's chances.  Good luck to you all!

Happy April Fool's Day! (I'm not pranking anyone on my blog because, meh, I don't get to see your expressions.)